We’ve been long on carrots all winter. One thing our garden seems to grow with relish is carrots and boy have we had a lot. They are delicious, sweet and intense and  seemingly  never-ending. I juice with them every morning and they go in to soups, stews and salads but importantly for the ‘little people’ they also go into cake!! The ‘pink one’ feeds them to ‘Toffee’, the fat pony and ‘Elsa’ and ‘Peta’,  the fatter rabbits. Every now and again I catch her digging one up and feeding herself, Peter Rabbit style, soil and all, and I can be heard screeching from the kitchen to at least attempt to wash it! No harm done yet and full points for hand to mouth living but a few lessons needed in cleanliness! 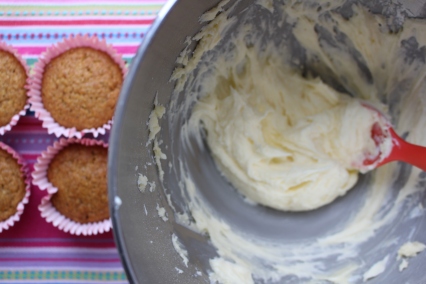 Now the blue one is a slightly different matter. It’s orange and therefore I wont eat it!! Orange means ‘beware’, ‘caution’, and in his view, ‘do not eat me’, I wonder if he’ll apply the same logic to easyjet? Well that was before a viewing of ‘Tractor Ted grows Vegetables’, hello carrot renaissance. Suddenly both ‘little people’ are obsessed with making carrot cake. Unsurprisingly, carrots in cake are fine, and to be honest let’s face it, they are pretty well disguised! We played around with lots of different variations and ended up with a spelt cake with carrot, sweetened with maple syrup and made with coconut oil. It’s a dairy free cake – at least it is until you top it with lashings of cream cheese frosting. You could just keep them plain but I think I would face a revolt. The spelt flour and polenta work really well, a little nutty and slightly textural,  and you can just taste a hint of the coconut but if this offends we have on occasion replaced it with sunflower oil or some simple light olive oil and both work brilliantly. The cakes are incredibly light thanks to the beaten egg whites and are super afternoon tea treats for those who have eaten their greens!

Line your cupcake tin with cases and set the oven to 180.

1.Mix together the grated carrot, oils, maple syrup and eggs, ideally in a Kenwood for 4 minutes or so on a low setting.

2.Fold in the flour, polenta, baking powder, bicarbonate of soda  and cinnamon so you have a loose batter.

3.Beat the 2 egg whites till soft peaks form and slowly fold into the batter.

4.Spoon into cupcake cases and bake at 180 for between 10 and 15 minutes depending on the strength of your oven.

5.Remove when risen and bouncy to the touch.

Place the butter and icing sugar in an electric mixer and beat hard until light and fluffy and well combined. Add in the cream cheese and repeat so everything is really smooth and well incorporated.

Ice the cupcakes when they have cooled.

Joanna Preston is mother of the 'little people', 1 pink and 1 blue, and wife to saintly Mr.Patience! After a decade dedicated to cooking for others (Alps, Africa and founding 'Sugar & Spice') my attention is now solely in the home kitchen. We are a food obsessed family that adore growing, sourcing and cooking delectable feasts for friends and family!
View all posts by lardersaga →
This entry was posted in Delectable delights, Toddlers and tinies and tagged Carrot and spelt cupcakes, Dairy free carrot and spelt cakes, Spelt cakes with cream cheese frosting. Bookmark the permalink.