To snack or not to snack? The perpetual dilemma for mothers of little people who need to get the balance right between keeping the batteries charged yet not ruining their little darlings appetite at the next sitting. As a rule I am a little draconian when it comes to snacks, hence I have historically made ‘fruit’ the snack. If you’re hungry between meals then an apple, banana, peach or pear will suffice but nothing more glamorous than that. However as autumn sets its teeth in with wild winds, driving rain and blinkered bright sun I seem to have weakened my resolve and have started playing around with other options. I guess there’s a guilt factor there as well. I happen to know that the ‘blue one’ is King Fussy in the school dining room so I am hugely suspicious as to what, if anything, goes down his gullet during the day. He’s certainly not going to starve and if you could be party to our breakfast feast there is genuinely no concern but after an intense day concentrating and with another 2 hours till tea it’s a long time from 8 till 5.30pm with little in your belly particularly with a swimming class to contend with! 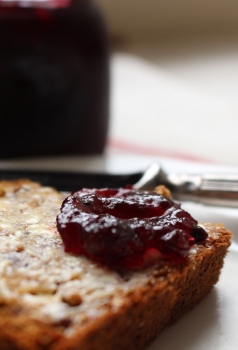 I have always been a lover of banana bread but always baulk at the sugar and butter content, so with this in mind I went on an Internet – Google voyage to salvage a healthier alternative. I googled many, many recipes and ended up none the wiser. Nothing quite did it so I embarked on my own testing session. I decided to use olive oil instead of butter, maple syrup instead of sugar and an organic malted grain flour instead of plain white. None of that is particularly revolutionary, so my guess is the addition of ripe mashed bananas is the key forgiving element, in that they add more natural sweetness and also help in the wonderful texture of the bread. I can smugly say, the result was gratifyingly good – confirmed by the little people’s inhalation of said bread. No cloying, sickly sugary after taste, but sweet enough to engage. For my troops this has been the perfect pick me up straight after school when a little sustenance is required but fruit no longer quite ticks the box and empty carb filled biscuits and buns are a no-no. It’s portable, easy to eat and keeps for several days. Of course it also is the ideal substitute to cake and has been my trump card for convincing the ‘little people’ to polish off their brocolli. We have tried toasting it and the ‘blue one’ is quite taken with eating it slathered in ‘blackberry and apple’ jam, courtesy of Auntie Bunty’s foraging expedition. So with all that in mind we are converted, bring on the banana bread, so easy to make and so good for that afternoon energy boost without killing tea, not to mention the fact it is the obvious home for overipe, brown bruised bananas!

In a mixing bowl beat the bananas with the whisk, add in the oil, maple syrup, egg and salt. Stop the beaters and stir in the flour, till well incorporated.

Pour the batter into your loaf tin and bake for 50 minutes to 1 hour. This seems a long time and it may well look cooked on the outside but it takes a surprising time to cook all the way through. To check, put a skewer into the centre, if it comes out clean it is cooked and ready.

Cool on a wire rack. 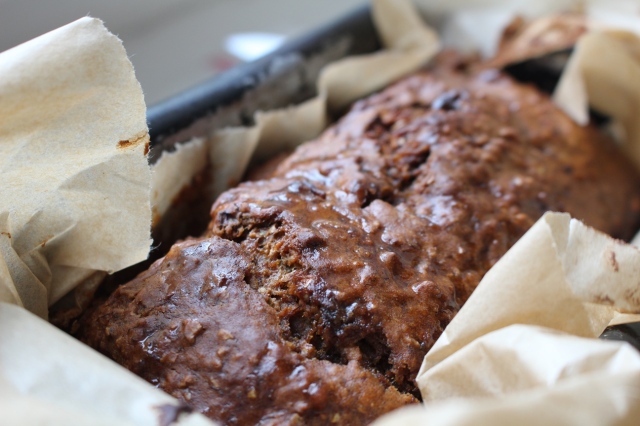 Joanna Preston is mother of the 'little people', 1 pink and 1 blue, and wife to saintly Mr.Patience! After a decade dedicated to cooking for others (Alps, Africa and founding 'Sugar & Spice') my attention is now solely in the home kitchen. We are a food obsessed family that adore growing, sourcing and cooking delectable feasts for friends and family!
View all posts by lardersaga →
This entry was posted in Delectable delights, Toddlers and tinies and tagged Children's healthy banana bread, Healthy banana bread snack, Malted grain banana bread, no butter banana bread, no sugar banana bread. Bookmark the permalink.