Run, run as fast as you can,

Posted on December 5, 2013 by lardersaga 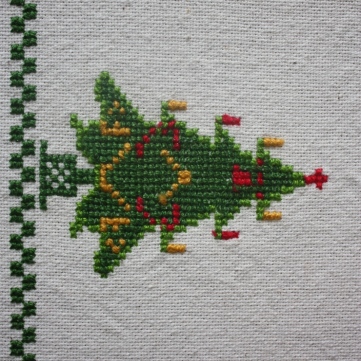 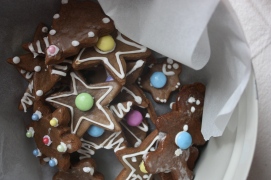 you can’t catch me I’m the gingerbread man! This is not exactly true judging by the vast quantity of gingerbread men, stars, christmas trees and snowflakes the ‘little people’ have guzzled in the last few days. Escaping is not something they have been that successful at. However, supplies are getting low again so I guess another batch is called for and maybe on this occasion said ‘gingerbread man’ will get his bid for freedom!

There is something wonderfully ‘Christmassy’ about gingerbread though I am not sure the origin of it is Christmas based at all, after all gingerbread adorns most bakers shelves throughout the year. I guess the Scandinavian countries have a tradition of gingerbread houses and actually thinking back to last week this is probably what prompted my desire to seek out a recipe. I happened to be in our local farm shop when I noticed a charming lady selling the most amazing gingerbread houses, so beautifully decorated I was quite taken back. The quality of the icing was superb and each little house totally bespoke with its own unique scheme, windows, doors, icicles and all. I chatted away to her and discovered that she and her two sisters had initially made these houses to raise funds for school projects but this year had embarked on a more cottage industry venture of selling them at fairs and farm shops in the run up to Christmas. I really wish them the best of luck because their craftmanship and skill is quite remarkable not to mention the fact they tasted delicious, at least the little love hearts did, the house is being saved for Christmas!

Like a cook possessed I hence embarked on my mission to track down a good gingerbread recipe. A quick trawl through my book collection did not really do the trick so I started on my favorite blogs. ‘Poires au Chocolat’ is a blog I use really quite frequently and it unsurprisingly had exactly what I was looking for. A super duper dark, spicy gingerbread recipe full of Christmas charm. The addition of 1 tspn of ground black pepper and 3 tspns of  cocoa caught me by surprise but I religiously followed the recipe and was not disappointed. Even the dough tasted sensational, all I could do to stop the ‘little people’ devouring it was to wrap it as fast as possible and leave it to rest in the fridge. The desired gingerbread took a couple of goes to get right but once there is completely fool-proof. I made the mistake of rolling it a little too thin on my first attempt, so don’t be shy go for a depth of about 3/4 – 1 cm – it needs this to create  the classic biscuit texture, hard on the outside while softish in the middle. The glaze is a brilliant addition and again don’t be shy, glaze within a couple of minutes of taking them out of the oven. We iced ours but they don’t need it and actually look almost more charming just in their simple minimalist state. 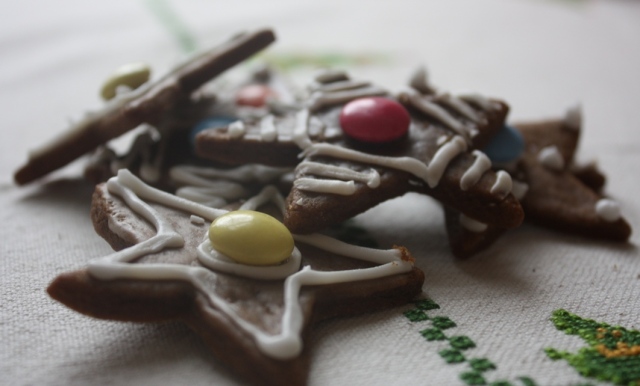 In a big bowl, weigh out the flour, ginger, cocoa, cinnamon, cloves, pepper, bicarb and sea salt. Stir until the spices are evenly distributed. In a mixer, beat the butter until it is soft and creamy. Add the sugar and cream until smooth and fluffy. Beat the egg lightly then add half to the bowl. Scrape down then beat until combined. Add the other half of the egg and beat again. Scrape down again and add the treacle and golden syrup. Beat until uniform and scrape down. Add the flour mixture and turn the mixer onto its lowest setting until the mixture comes together. Scrape the dough onto a sheet of cling film then wrap tightly and chill overnight.

Preheat the oven to 180C/350F. Take half the dough and roll it out on a well floured surface to a thickness of about a cm. Dust the surface of the dough and cut out your desired shape. Transfer to a  baking sheet covered with bakewell paper. Repeat until you’ve finished the dough, re-rolling as needed. You can very gently dust excess flour off the prints with a soft pastry brush if needed.

Place the tray into the oven and bake for 7-12 minutes, depending on the size and thickness. They should start to brown around the edges but still be soft to touch in the middle. While they bake, whisk together the icing sugar and water. Once the cookies have cooled for 2 or 3 minutes on the sheet, carefully transfer them to a wire rack and gently but confidently brush the surface with the glaze. Repeat with any other trays. Leave to cool on the rack then keep in an airtight box for up to 2 weeks.

Ice and decorate if the ‘little people’ desire!

Thank you Emma at http://www.poiresauchocolat.net for introducing me to such a delicious version of gingerbread, totally indulgent and just perfect for this time of year.

Joanna Preston is mother of the 'little people', 1 pink and 1 blue, and wife to saintly Mr.Patience! After a decade dedicated to cooking for others (Alps, Africa and founding 'Sugar & Spice') my attention is now solely in the home kitchen. We are a food obsessed family that adore growing, sourcing and cooking delectable feasts for friends and family!
View all posts by lardersaga →
This entry was posted in Toddlers and tinies and tagged Christmas gingerbread, Gingerbread biscuits, Gingerbread men, Gingerbread stars. Bookmark the permalink.