Too pretty to eat?

Debatable it has to be said, this tart is almost too pretty to eat, but not quite! I made it a couple of weeks ago for a ‘tart’ order that had come in from my sister and one of her colleagues at the wonderful ‘Liberty Wines’. Of course it is seriously naughty but the raspberry cuts through the cloying white chocolate and the coulis that I have now perfected with a little cassis seems to balance out what could otherwise be viewed as verging on the ‘sickly sweet’ boundary. English raspberries can still be found in most greengrocers and still have a wonderful flavor.  So if you, like me, are harking on about an Indian Summer, what better way to embrace it than encasing such delectable morsels, the raspberries that is, into this white chocolate beauty of a tart? 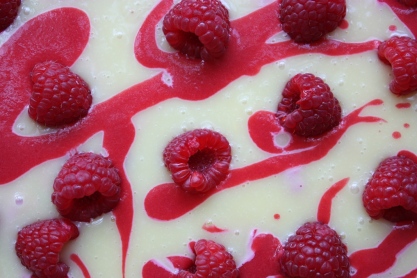 At the farm we appear to have a late crop, Autumn fruiting raspberry, that the little people and myself have been feasting on. There is something rather smug about growing raspberries in the last days of summer when one normally thinks of them to be in their prime in June or July. I can’t really account for it and I don’t believe there was any masterplan behind it when we planted the canes but I can certainly recommend it. They taste quite sensational and when much of the kitchen garden is beyond its’ sell by date, especially in the soft fruit zone, it is rather lovely to come across these little treasures. 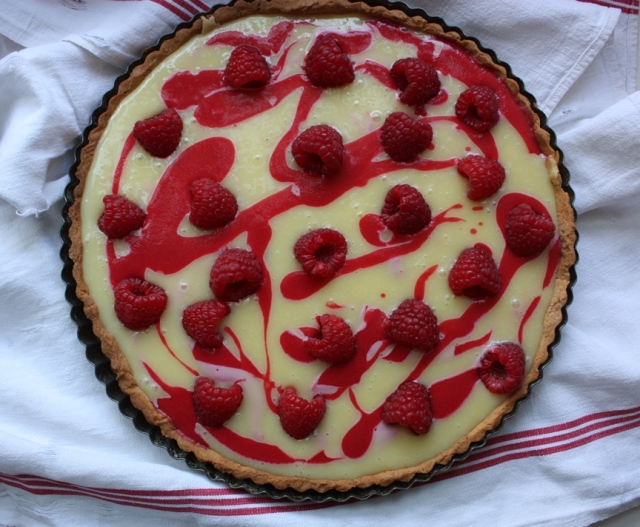 White chocolate and raspberry tart – inspired by Ottolenghi – The Cook Book, but with a few tweaks here and there!

A few drops of vanilla extract

1. Put the flour, butter, sugar and vanilla into a food processor and pulse until fine crumbs form. Add the egg yolk to bring the pastry together, it should be soft and pliable a bit like a harder version of play dough! Bring together as a ball.

3. Remove the tart case from the fridge and line with baking paper and baking beans and bake blind in a pre-heated oven at 180c for 20- 30 minutes. After about 15 minutes remove the baking paper and beans to let the tart bottom dry out. Remember this is all the cooking this tart case is going to get so you want to make sure it is ‘shortbread biscuit like’ cooked!

1. First of all make the raspberry and cassis coulis. Put one punnet of raspberries in a liquidizer and whizz up with 1 – or 2 tablespoons of cassis, until really smooth. Now sieve out the seeds and set aside.

3. Now spoon the chocolate into the tart case followed by a swirl of the raspberry coulis, repeat until the tart case has been filled and you are left with a painted picture ! Pop the remaining raspberries into the tart and put it in the fridge to set for at least 1 hour. Serve with additional raspberries.

This recipe may look like a bore but actually once you have done the tart case it is a complete doddle!! And it really is rather good – I have never been a massive white chocolate fan but the marriage of the raspberries does work remarkably well!

Joanna Preston is mother of the 'little people', 1 pink and 1 blue, and wife to saintly Mr.Patience! After a decade dedicated to cooking for others (Alps, Africa and founding 'Sugar & Spice') my attention is now solely in the home kitchen. We are a food obsessed family that adore growing, sourcing and cooking delectable feasts for friends and family!
View all posts by lardersaga →
This entry was posted in Delectable delights and tagged Ottolenghi white chocolate and raspberry tart, White chocolate and raspberry with cassis, White chocolate tart. Bookmark the permalink.