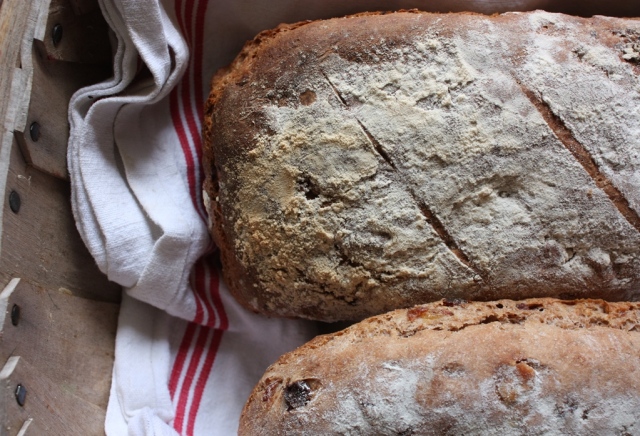 Hoorah hoorah a bank holiday weekend filled with sunshine, laughter and lots of time outside. A few toddler battles with the ‘blue’ one, mainly about leaving the farm, ‘London’s boring’ he roars. Really, I mean how can London can possibly be boring, today alone we have nursery, swimming followed by a whizz round the Physic Garden, then ballet. Hardly boring, but I guess compared to the farm his freedom in town is curtailed and that for a little boy is a big challenge. Added to which the farm is just one big playground. This sounds almost Biblical, but finally the flood water has receded, the ground has dried up, spring has arrived in all of its glory and every weekend is just one long adventure. Each morning the kitchen doors are thrown open and the little people escape into the great outdoors. Freedom for them,  and a few moments of peace for us! 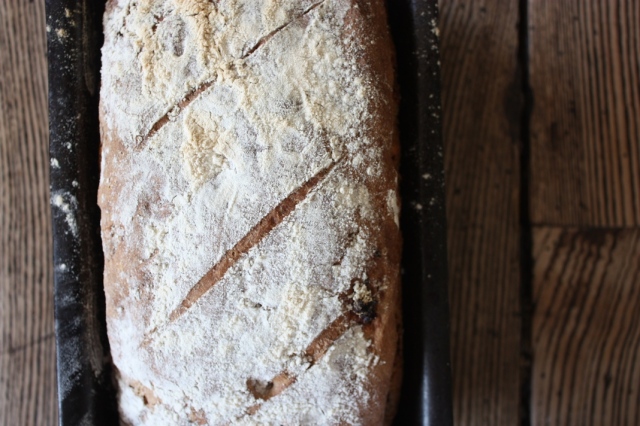 Fridays have now become my baking day. I try to get organised, baking bread, cakes, making pasta, brining meat, curing fish, all in an attempt to be vaguely ready for the constant trickle of people who come to stay. I can’t resist home-baked bread and recently I have been experimenting with a number of new recipes. Largely inspired by a charming blog called ‘thelittleloaf’, I have deviated from my usual repertoire, expanded my flour collection and just been a tad more adventurous. ‘Most yummy to date’ has been the ‘seeded spelt loaf’, unanimous applause all around from the rather critical home team, http://thelittleloaf.wordpress.com/2011/05/17/seeded-spelt-two-little-loaves/.  However, with the Bank Holiday weekend looming I defaulted and returned to my old favourite, ‘Walnut and Raisin’ . You don’t need a bread maker to make this but a Kenwood with a dough hook makes life a lot easier. The bread is simple to make, and once baked is quite  irresistible, eaten fresh or toasted, it is really moreish, devoured in no time. And there lies the problem, it just is never around long enough. All my good intentions of bringing the rest back to London fade as by Monday all I’m left with is a pile of crumbs! 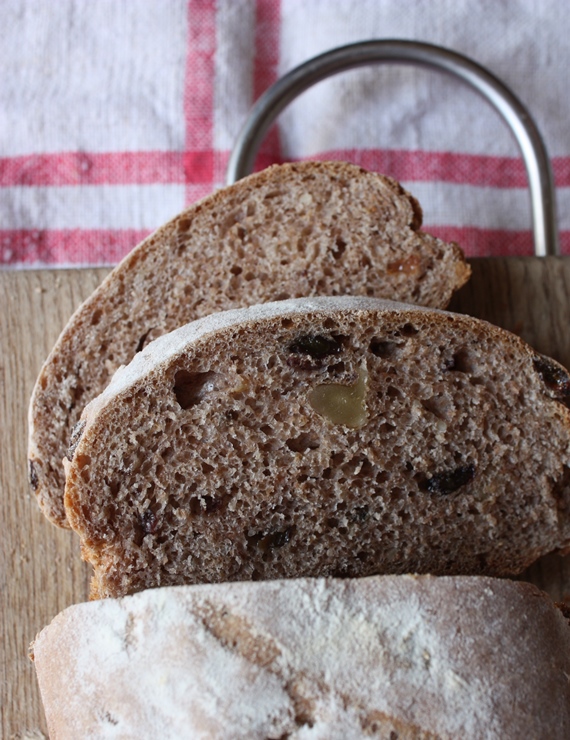 I totally understand that making bread is probably relatively low on most people’s cooking agenda, but if you have a ‘Kenwood’ or ‘Kitchen aid’, or if you just want a good arm work out (gets rid of those bingo wings), do have a whirl. It really is easy and the end result is just so very satisfying, not to mention the instant elevation in your domestic goddess status; mine sadly got blown to bits by the ‘blue’ one, ‘Mummy, I don’t like the yukky bits’, that’ll be walnuts to you and me! Typical, you can’t please everyone.

1. Weigh out the flours and put in a the mixing bowl along with the yeast, salt, raisins and walnuts pieces. Put the dough hook on and start on the lowest setting, slowly add the warm water, the flour will be pulled in to form a dough, go easy on the water as you don’t want a really wet dough but you also don’t want it too dry either! Knead for 10 minutes and then turn out. Place the dough in a clean bowl, cover and leave somewhere warm for at least 60 – 90 minutes to double in size.

2. When the dough has doubled in size, turn it out and hand knead for a few minutes before shaping your bread. I made 1 loaf tin and one small loaf with the quantity above, though you could make 1 large round or 2 small rounds. Dust with plain flour and make a few slashes across the bread. Leave your bread to prove again for another 20 minutes. Now turn your oven on to 200c.

3. Pop your bread in the oven and bake for 25 – 45 minutes depending on the size of your loaf. The bread should sound hollow when tapped. Turn out and leave to cool.

For lots more lovely bread recipes have a peep at ‘thelittleloaf’: http://thelittleloaf.wordpress.com/

Joanna Preston is mother of the 'little people', 1 pink and 1 blue, and wife to saintly Mr.Patience! After a decade dedicated to cooking for others (Alps, Africa and founding 'Sugar & Spice') my attention is now solely in the home kitchen. We are a food obsessed family that adore growing, sourcing and cooking delectable feasts for friends and family!
View all posts by lardersaga →
This entry was posted in One for the larder, Picnic party and tagged bread, seeded spelt loaf, thelittleloaf, walnut and raisin bread. Bookmark the permalink.