Poor little lambs. They all arrived (that is all 6 of them) earlier than usual under the illusion that spring was around the corner. How wrong could they be. It has been snowing on and off here for 2 weeks, the wind is ‘Baltic’ and there is barely a sign of life in the garden. Sadly Mr.Fox got his cunning way and stole away with one, and annoyingly the ‘teenage pregnancy’, as she is fondly known, rejected her second, so ‘Daisy’ has been hand reared. The remaining 4 bounced around the field full of enthusiasm on the only sunny day in March, allegedly, Monday 4th, they have now taken to shivering in their shelter, deeply unimpressed by the relentless rain, snow, sleet and hail. I seem to break ice on the water troughs more often than not and can’t help feeling sorry for the charming wee dears, given their rather grey and cold reception in our world to date. 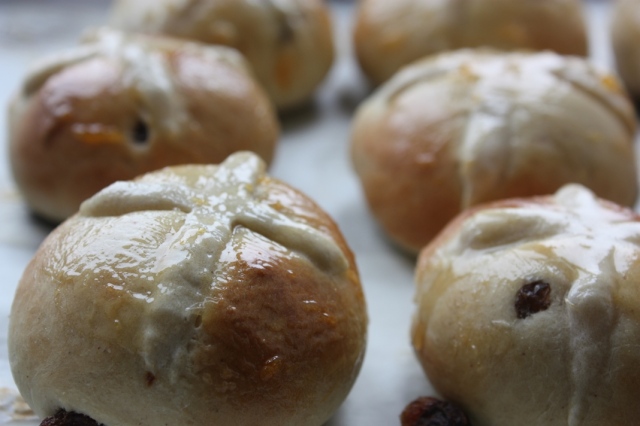 Hey ho, that should all change soon. I mean after all we have to be on the cusp of Spring, don’t we? Even if you can’t feel it, you can indeed see it, it is now light at 6am and stays light for well over 12 hours. Yes it is unusually chilly but that can change in a nano second and I am optimistically hoping it will in time for Easter, as are the lambs, the little people and probably everyone in England! So with feeding ‘Daisy’ sadly a thing of the past, she has graduated to the lamb orphanage, to socialise (in her own interests I am told), I have been flexing my fingers baking hot cross buns, and quite a lot of them! 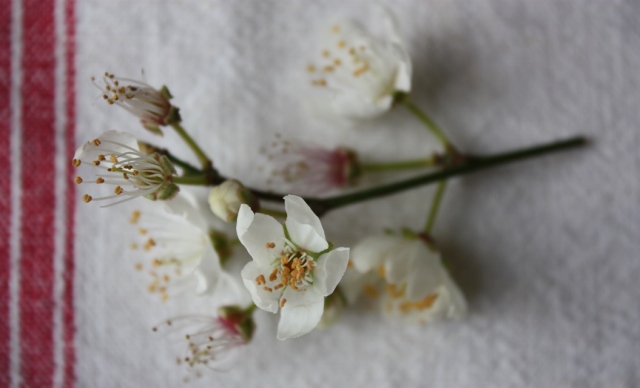 I love hot cross buns. Last year I made my inaugural batch and was massively disappointed. What subsequently transpired was the yeast used was out of date by a country mile and unsurprisingly failed to reactivate,  ‘hot cross rocks’ materialised, they were inedilble~! Take 2, determined to crack it in time for Easter, I decided to get ahead of the game and try out a few recipes prior to Good Friday. Attempt no 1, was another disaster, namely as I forgot to add the butter, total human error but I was beginning to feel fated at making these blessed buns. Attempt no 2, a vast improvement (all ingredients made it in this time) and attempt no 3 a real success; particularly the ‘hot cross loaf’. This being the pre-run for a much talked about starter that has been lined up for the Easter weekend, to be served toasted, rather indulgently with ‘fois gras’. Well why not? after all brioche is hardly a million miles away! 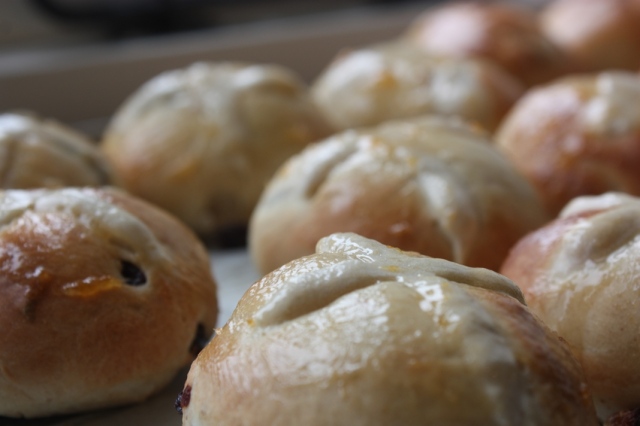 I could talk a lot about these delightfully spicy, fruity, bready buns. I mean doesn’t everybody love them? Certainly the ‘little people’ agree. Toasted, served with lashings of butter they more than hit the spot, particularly at the end of the perishing cold days experienced recently.   They are relatively straight forward to make and I have simplified an already simple Delia recipe to ideally make it more fool-proof. The cross is intriguingly just a flour and water paste but I have yet to perfect my piping. The origins of the cross are somewhat more fascinating than the ingredients that go into it. Allegedly, and I am plagiarizing hugely from ‘A History of English Food’ by Clarissa Dickson Wright, a cross was placed on buns a plenty prior to baking to encourage the rising of  the yeast and to ward of evil spirits. This was prior to the Reformation, but after our rather critical break with Rome (1532) crosses were banned, deemed to be Papist and were only allowed on buns on Good Friday, hence ‘Hot Cross Buns’. Possibly a dubious story, I don’t know, but it seems plausible. As you can see our austerity measures are a little slack as we have been indulging in these ‘Good Friday’ delights for several weeks. They are, in spite of my initial setbacks and being a very ‘hot, cross Mummy’, remarkably easy to make and a world apart from anything bought in a shop. 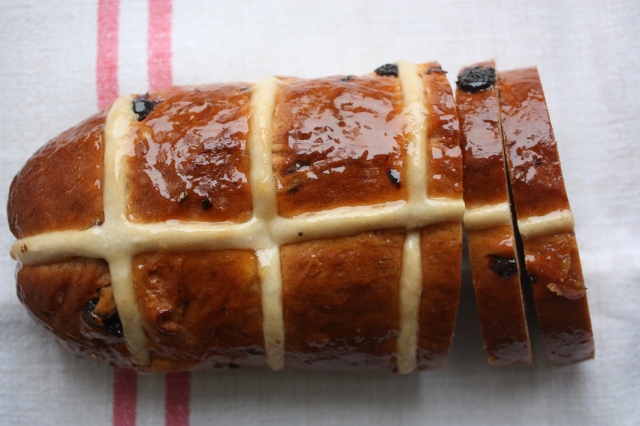 1. Pour 150ml of hot water into a pyrex bowl, whisk in the 1 teaspoon of sugar and now whisk in the dried yeast, stir several times and leave in a warm place, untouched to reactivate. A spongy, frothy head will develop.

2. Put the flour, sugar, salt, spices, dried fruit into a mixing bowl (ideally on a Kenwood) and add the dough hook. When the yeast has been reactivated, about 10 – 15 minutes pour slowly into the bowl with the Kenwood mixer on the slowest setting. Add the warm milk, melted butter and whisked egg, and let the dough hook do the work bringing all the ingredients together. When a sticky dough has formed you can either knead it by hand, or keep it in the mixer (doing the hard work for you) for a good 6 minutes.

3. After 6 minutes, stop the mixer, cover the bowl and leave in a warm place to grow in size. Ideally the mix should almost double, and from my experience in our rather chilly kitchen this takes a healthy 2 hours. It may take less or more time, just keep an eye on it. Once risen remove from the bowl and hand knead again for a few minutes. Now you are ready to shape your buns or your loaf.

4. Line a baking tray with parchment paper and set the oven at an unbelievable 210. Shape your buns depending on your preference on size and place on the parchment paper, on the tray. Make a cross on each one and pipe the flour and water paste on top of the cross. Leave to rise again in a warm place for another 20 -30 minutes.

5. Now pop the buns in the oven but don’t go away. They bake surprisingly fast, 12 – 15 minutes. When cooked, they should be light brown to golden on top and sound hollow when knocked underneath. Leave on a wire rack to cool.

6. Make the glaze by boiling the apricot jam with the water, to a syrup consistency, paint on top of the buns with a pastry brush.

7. These buns are best eaten on the day of baking, but if you can’t consume them all, they are fantastic toasted for several days afterwards, and I believe freeze extremely well.

Joanna Preston is mother of the 'little people', 1 pink and 1 blue, and wife to saintly Mr.Patience! After a decade dedicated to cooking for others (Alps, Africa and founding 'Sugar & Spice') my attention is now solely in the home kitchen. We are a food obsessed family that adore growing, sourcing and cooking delectable feasts for friends and family!
View all posts by lardersaga →
This entry was posted in Delectable delights and tagged Buns for Easter, Hot cross buns, Hot cross loaf. Bookmark the permalink.