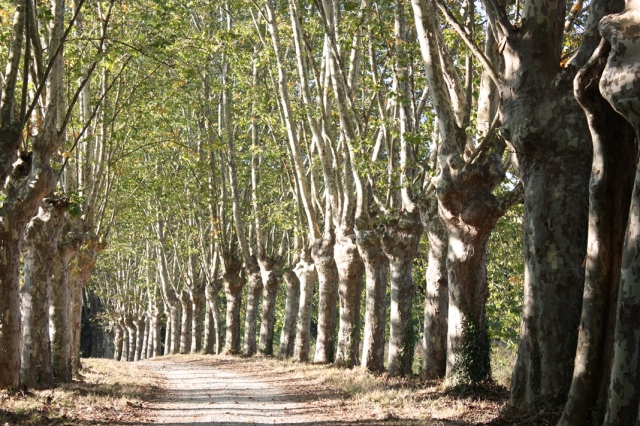 Contrary to popular belief, we rarely go away at weekends, largely because the tribe, Mr.P included, is wedded to the farm, riding ‘Toffee’ and chasing sheep. September being the exception, with a weekend in Suffolk and one in Bordeaux. Now I have been to Suffolk many times, but Bordeaux was a new one on me. Firstly, don’t get me wrong I love the ‘little people’, and adore their company,  that is, most of the time (never at 5am), but there is something very indulgent about having time out just with Mr.P. We were catapulted into South–West France because Mr.P in his wisdom, has bought, as far as I can decipher, a little bit of vine, this vine is thank fully part of a larger vineyard, jointly owned (at least for the next 10 years) by a collection of other wine connoisseurs. This all sounds like a pretty poor excuse for going to Bordeaux, but there was a rather key tasting taking place at said vineyard, and this seemed the perfect prompt for a cheeky escape from the ‘pink’ and ‘blue’.

Flights to Bordeaux are ‘mini-break’ heaven – there is an absurdly early flight on a Friday morning but the upside is you’re treading on rich and rare Bordeaux soil by 945am,  therefore having the whole day to play with, likewise on return we were back in ‘Blighty’ in time for Sunday lunch. Strangely we never made it into Bordeaux city which I believe is stunning, instead we dashed down to Sauterne country and visited Chateau Coutet and the following day the coast, that’s the Atlantic if your geography needs a little reminding.

We weaved around the roads between miles and miles of intricately kept vines, in awe of the quantity of Chateau and the relatively small size of some of the estates, crisscrossed over the Garonne, and were genuinely spell-bound at how beautiful the countryside is. The villages look old, properly old, built with that pretty sun-baked sandstone. The vines were just beginning to get really heavy from the ripening grapes, some aubergine purple, others, moss-green. It is a symmetry lovers paradise, everything is so neat, perfect alignment  between the vines, perfectly angled towards the sun. The landscape is precise, yet at the same time tranquil and calming – quite unusual – and of course, ideal picnic weather.

A quick raid on Barsac, a visit to the boulangerie, and charcuterie and lunch was sourced. Sitting on the banks of the Garonne watching the muddy water slip away we considered what to do the next day and were sold on the idea of fresh oysters from the Atlantic at Arcachon Bay. This should have been a genius day out had I not map read quite so badly, we did eventually get to Cap Ferret and the said oyster supply, but via the scenic route! This journey should take about 1 hour, one moment you are in the thick of some of the most famous vineyards in the world, and the next you should be on the edge of the Atlantic,  (we weren’t but that was my fault!) white beaches stretching in each direction and empty,  barely another sole there! It was/is quite unbelievable.

Obviously people tend to go to Bordeaux for the wine, I really went for the food. I don’t drink red wine, so sadly Mr.Ps’ vine is rather lost on me! But the food, well that is another story. French picnics are always very satisfactory as lets face it, no one really can make a baguette taste quite as good as the French. And frankly, it is impossible to beat  the fresh oysters at Cafe Pinasse, looking out over the glistening Arcachon bay, you can survey the  biggest sand dune in Europe while guzzling some of the freshest seafood in France.   The oyster beds are literally in front of the cafe! On the Friday night we had dinner at the beautiful ‘Les Souces De  Caudalie’, a restaurant with a Michelin star, which unusually was much less ‘faff’ than normal, none of those endless courses you don’t order arriving between the courses you do order, which for me was a relief. The food was in sympathy with the season and local area, the ‘terroir’.  It was  sourced carefully and  exquisitely prepared, quite a delight and refreshingly unexpected.  It was uncomplicated, utterly divine and did not leave you with a dreaded food hangover. Saturday night was the wine tasting, sadly that was lost on me, but apparently the vine is ‘promising’.

As memories of Bordeaux fade, I started thinking as to how one could create a good autumn salad, something quintessentially French, and something to remind me of those  sunny few days in Bordeaux. Variations of this salad have existed for years, but my novel contribution is to add in roasted grapes. ‘Roasted grapes’ I hear you say – pretty controversial – trust me, try it, they are quite delicious.  So please let me introduce a ‘Chicory, Roquefort, roasted grape and walnut salad’ , for an easy salad, starter or lunch this is well worth a punt. The bitterness of the chicory balances out with the sweetness of the grapes and saltiness of the Roquefort, the flavours marry and it really is rather good. 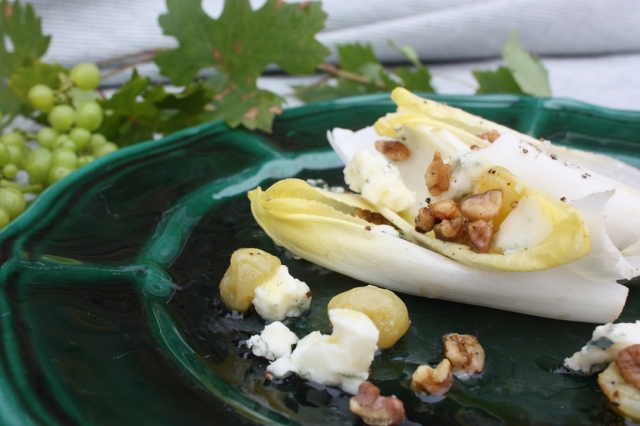 1 head of chicory or 2 small heads

A good handful of walnut halves

1. Pop the walnuts on an oven tray and put in the oven for 8-10 minutes – please watch them carefully and don’t leave them in the aga, as they are the easiest things ever to forget about! They should be lightly roasted, so they are just beginning to release their wonderful nutty aroma.

2. Pop the grapes on an oven tray with a splash of olive oil, a pinch of salt and  grind of pepper and pop in the oven for 10 minutes until shrunken and collapsed in size.

3. Wash the chicory leaves and spin dry,  and crumble up the Roquefort into small bitesize pieces.

4. Now make your salad, a few leaves of chicory on the bottom, a few walnuts, a few crumbles of Roquefort, and a few grapes – carry on like this on each plate and build up several layers.

5. Finally add a tablespoon of white wine vinegar and a tablespoon of olive oil, to the grape juices at the bottom of the pan they roasted in, and drizzle the juices/ dressing over the salad. Grind of black pepper and pinch of Maldon sea salt and your salad is ready.

Flights – we flew BA from Gatwick to Bordeaux

‘Cafe Pinasse’ in Cap Ferret is humming. Serving the freshest, local catch, it is a really buzzing, fun place for lunch.

‘Les Sources de Caudalie’ – is where we had dinner. ‘Tres elegante’ and it’s attached to a very special hotel.

Joanna Preston is mother of the 'little people', 1 pink and 1 blue, and wife to saintly Mr.Patience! After a decade dedicated to cooking for others (Alps, Africa and founding 'Sugar & Spice') my attention is now solely in the home kitchen. We are a food obsessed family that adore growing, sourcing and cooking delectable feasts for friends and family!
View all posts by lardersaga →
This entry was posted in Little black foodie book, Seasonal salads and tagged Bordeaux. Bookmark the permalink.

1 Response to Tinkering in Bordeaux