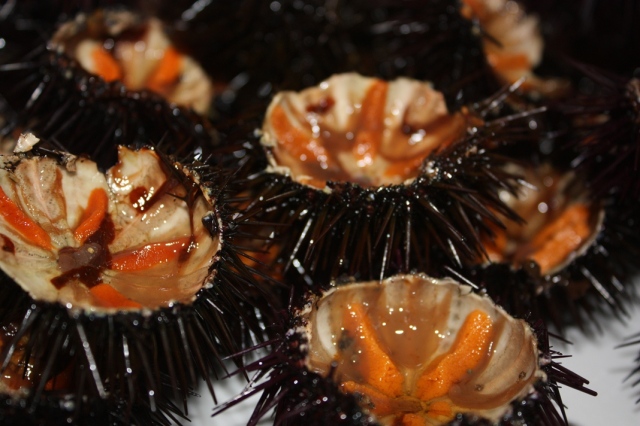 Relief all round, especially for Mr.P – the famous ‘ricci’ have been sourced and devoured. 100 to be precise – I think I ate about 50 of them! As you can see they are prickly little morsels, but morsels they are and delectable too. We are not authentic ‘Ricci di mare’ eaters as we did not actually collect our own – this being part of the whole very delicate process – we left that to the professionals with their cunningly designed scissors that snip ‘oh so delicately’ these fragile urchins off the rocks. This is rather key as the edible part rests completely on one side so you don’t want to get the wrong end. That part being what I have always been led to believe is the ‘roe’ but actually on further investigation is in fact the organ that produces the eggs rather than the eggs themselves, rather unfortunately referred to as the ‘gonads’. Gonads, roe, eggs, whatever one chooses to call them they are quite unique and probably along with oysters, caviar and botarga have a peculiarly unique taste and texture. I adore them, I do know somewhere I can eat them in London but it is just not the same. I want the plastic beach side chairs and tables, salty hair, sun-baked skin and a pile of urchins, looking out over the Adriatic, not counting every pound I have spent on them but instead relishing that they are such a bargain at 20 Euros for a 100! or thereabouts!!! 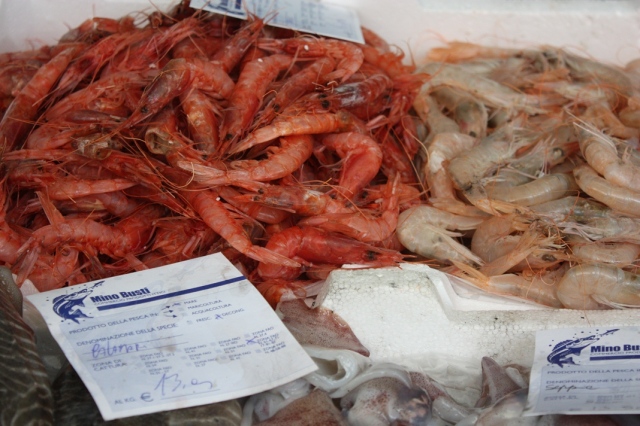 This heavenly 2 week holiday has been a feast of seafood. To be honest meat has barely been a feature which is hardly surprising given the scope and variety of fish and shellfish available. Raw fish is very popular in the form of tartare and carpaccio and we have had more than our share of gamberi rossi, sweet red prawns, which we serve raw literally with a splash of olive oil and freshly squeezed lemon. ‘Spada’ (swordfish) has been simply cooked on the bbq, ‘Seppia’ (cuttlefish) has had similar treatment, squid in every different shape and size has been eaten in rissotto, pasta and on skewers. ‘Tonno’ has been bought whole and minutely gutted and filleted, marinated and served lightly seared, on top of slow, sweet baked peppers. It has been a seafood bonanza. 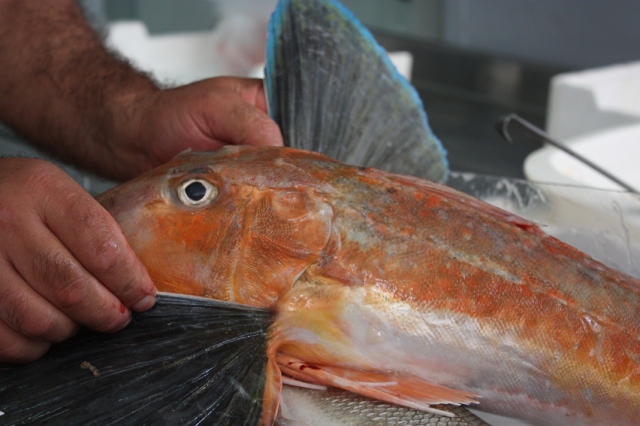 We have eaten unknown fishes none of us have ever heard of, plenty of ‘vongole'(clams), ‘cozze’ (mussels) but no crab! One can only assume it is either out of season or just these warm reaches of the mediterranean are not chilled enough. We have endless sessions in the kitchen with eager eyes watching ‘polpo’ being cleaned and cut up, 2 year olds and 20 year olds seem to be equally fascinated. We have even had a swordfish beak, a superb sword of maybe 80cm, kindly given to us by the fish monger drying on the roof that has on subsequent investigation been snatched by a creature of the night. It has been seriously indulgent, a complete luxury, and astonishingly reasonable. 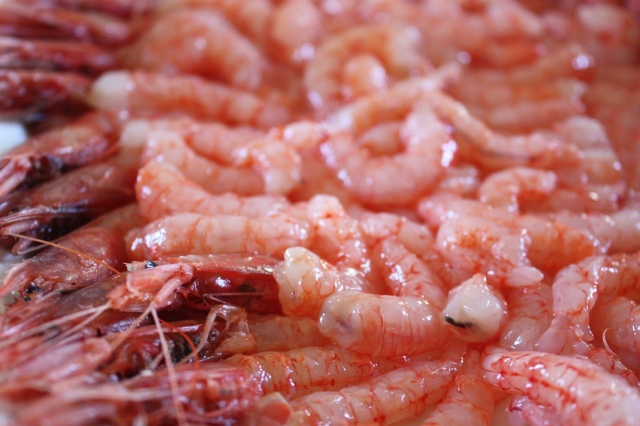 This is a rugged part of Italy and though popular with the Italian tourists who plaster the local beaches like seals we have as yet still not heard another English voice. It is clearly not the Amalfi coast, Sardinia or Porto Ercole but it does have a unique charm that is quite enchanting. Obviously the food is a magnet for our family but beyond hunting for local specialities and markets, the local towns are steeped in history and culture, ancient olive groves seem to stretch to infinity and the sun importantly shines almost every day (annoyingly just not on my birthday). 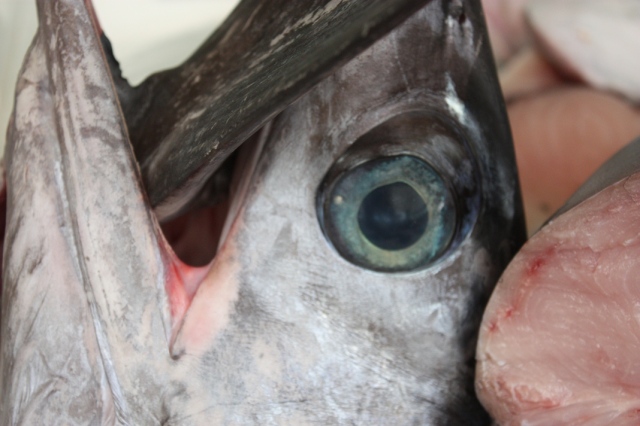 SKILE – località Porto Badisco – 0836 811631 – is the ‘Ricci’ restaurant we have been frequenting – phone ahead to order the said ‘Ricci’ to avoid disappointment.

Martano – our closest town has a tiny, but wonderful fresh pasta shop called ‘Bonta Salentine’,  Via Soleto, T 338 309 1970 and an extremely good wine shop ‘Divino’ with a superb selection of Italian wine, not solely Puglian.

Maglie – has a lovely covered market with about 6 different fishmongers and the same again fruit and vegetable stores. Just outside the covered market is a super fresh mozarella and burrata shop which also sells delicious bread.

Roadside stores seem to sells the best melons, figs, tomatoes, along with super salty capers, sundried tomatoes and and chillies.

Joanna Preston is mother of the 'little people', 1 pink and 1 blue, and wife to saintly Mr.Patience! After a decade dedicated to cooking for others (Alps, Africa and founding 'Sugar & Spice') my attention is now solely in the home kitchen. We are a food obsessed family that adore growing, sourcing and cooking delectable feasts for friends and family!
View all posts by lardersaga →
This entry was posted in Fish fantastic, Little black foodie book and tagged Puglia, Ricci di Mare. Bookmark the permalink.