‘Angels navels’ – have I just made this up ? or is it actually what these divine, flat, little, white peaches are called? After some hunting on the internet I am none the wiser, but it’s a  good name for these ‘heaven sent’ fruit. Typically found in French and Italian markets they have now decided to travel and  I have recently spotted them in,  Andreas, http://www.andreasveg.co.uk/, Cobbs, www.cobbsfarmshop.co.uk/ and importantly Lambourns’ ‘fruit and veg’ market, held every friday in the square in front of the church. Lucky me – and lucky for the ‘pink little person’ who thinks they are nectar – mind you she also eats gravel, so may not be a worthy judge – that’s a 1-year-old for you!

Introduced from China in 1869, they are smaller, flatter, sweeter than the normal white peach. They are a more manageable size – somewhat easier to eat and actually a much more interesting shape – hence why the name works so well, ‘angels navels’ (where did I find it – or have I really made it up?). Obviously they are magic consumed in their own solitary splendour but teemed with a few other Italian delicacies  they make one of our families favourite starters. 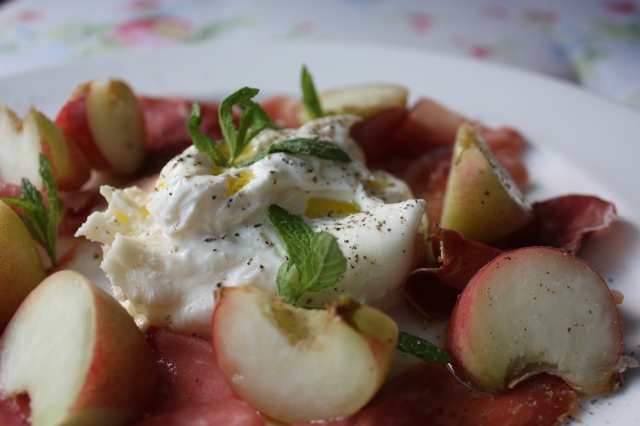 As a food obsessed home we rather greedily have a starter and main course every night – it is pretty rude – but small consolation, we don’t ‘do’ pudding. This is probably out of guilt but honestly I think it is more to do with balance. Typically I concoct a salad, or fish based starter – sometimes it requires skill more often it is about sourcing really good foundation ingredients and not playing around too much. This is my cooking creed, simplicity, good ingredients and marrying flavours. Such as this heavenly little starter – not to be eaten every night (the cheese would give you a heart attack) but once in a while it is utterly forgivable. It has ‘agrodolce’ written all over it, the rich indulgence of the burrata sat next to the sweetness of the peaches and earthy base flavours of the Sardinian ham – try it – it is very special – everyone will love you! Importantly it also shouts ‘SUMMER’ and frankly we need all the reminders we can get.

6 slices of Sardinian Ham (you can also use Parma ham)

Preparation time – 5 minutes – it really is that quick.

Lay the ham around 2 plates, break the burrata in half and place half on each plate, cut the white peaches into 8 and dot on top of the ham – drizzle with olive oil, grind of pepper and pinch of salt and finish with a few sprigs of fresh mint.

Burrata – literally means ‘buttered’ in Italian – and that is what this naughty ball is all about – it is basically a much richer cousin of mozzarella. The outer shell is mozzarella but inside it is a combination of mozzarella and cream and it is sheer indulgence! I really don’t think it was available 10 years ago but my trusty friends at Olivo, www.olivo.co.uk/, have had it on their menu for certainly the last 8 years and conveniently  now sell it in Olivino, their delicatessen on Lower Belgrave St, London.

‘No Burrata’ – if you can’t source the ‘rich cousin’, really good mozzarella will also work .

If you have it as a starter do go easy on a main course – we followed it with bbq poussin with a wild rice salad – clean and light, and a complete contrast to the intensity of the cheese.

Joanna Preston is mother of the 'little people', 1 pink and 1 blue, and wife to saintly Mr.Patience! After a decade dedicated to cooking for others (Alps, Africa and founding 'Sugar & Spice') my attention is now solely in the home kitchen. We are a food obsessed family that adore growing, sourcing and cooking delectable feasts for friends and family!
View all posts by lardersaga →
This entry was posted in Delectable delights, Little black foodie book, Seasonal salads and tagged Andreas, Burrata, summer. Bookmark the permalink.