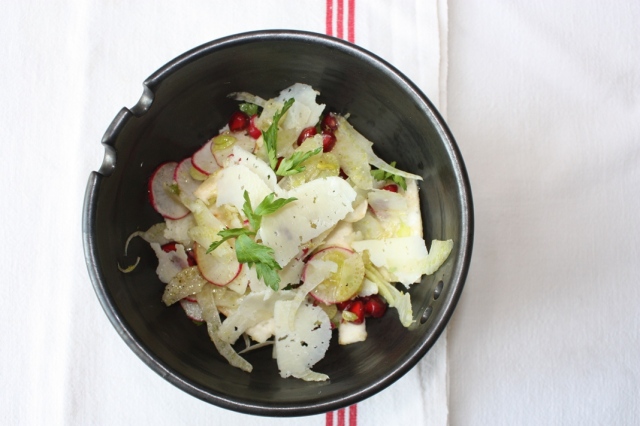 Perfect summer fare for hot, sticky days. This salad is raw and inexplicably good. I can’t take the credit for the marriage of ingredients as the base of it has to be credited to the wonderful chef Jacob Kennedy of ‘Bocca Di Luppo’ fame. However, being a meddler in the kitchen I have altered a few things, (and very slightly at that), namely by adding in some fennel. This salad is clean and crisp, tastes healthy, looks pretty, (check out the jewel-like pomegranate) but has a shadow of naughtiness with the addition of truffle oil, which adds a wonderful intensity and depth.  It’s a stunning summer starter or light lunch. 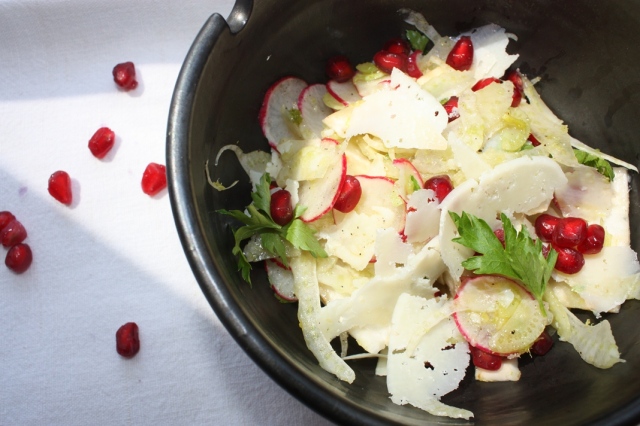 Serves 4 as a starter

Make the dressing first by whizzing all the ingredients together.

15 minutes before you need to serve push the radishes, fennel and celeriac through a mandolin on a thin/ fine setting – pop in a bowl with a splash of olive oil and lemon juice. Toss together.

Layer up the salad with the raw vegetables, Pecorino, scattering of pomegranate seeds and a spoonful of dressing between each layer – throw a few sprigs of flat leaf parsley over the salad and serve immediately. 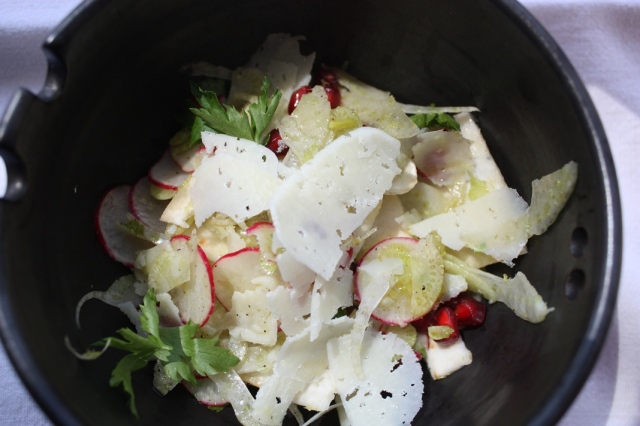 For a wide selection of Pecorino have a look at what Olivino has to offer :http://www.olivorestaurants.com

For more on Jacob Kennedy – his cookbook is a feast for lovers of Italian food – ‘Bocca Cookbook’, or better still his restaurant http://www.boccadilupo.com/.

Joanna Preston is mother of the 'little people', 1 pink and 1 blue, and wife to saintly Mr.Patience! After a decade dedicated to cooking for others (Alps, Africa and founding 'Sugar & Spice') my attention is now solely in the home kitchen. We are a food obsessed family that adore growing, sourcing and cooking delectable feasts for friends and family!
View all posts by lardersaga →
This entry was posted in Little black foodie book, Picnic party, Seasonal salads, Vivacious vegetables. Bookmark the permalink.